Anny GAUTHIER-MACAIRE has been an owner and breeder for 30 years. She started in Paris as a rider. A second home in Normandy brings her closer to horses. She falls in love with a reform mare that she buys and learns to ride with her. One thing leading to another, Anny « gets into the game » and buys an Anglo-Arab horse, from which she will have a product. Then comes the purchase of a thoroughbred.

It is then that she comes to trot, with the mare remaining at the grass in Normandy. She appreciates the help of Jean-Pierre DUBOIS, Louis BAUDRON’s grandfather, and the coaches at the Grosbois training centre where she rents a box.

This is how she enters the « racing world »! Her interest for breeding does not weaken, the passion of the horse is there!

She wishes to propose a mare to Jean-Pierre DUBOIS, he then advises her to propose one that starts in the stable to Louis (he is then about twenty years old) : it will be QUOREANE D’ORGERES, who’s an excellent mare but temperamental, which will make her disqualified in the St Léger des trotteurs, Group I whereas she had won the race ! She was also 2nd in QUALITA BOURBON, the best mare of her generation. She will later become semi-classical.

Her relationship with Louis BAUDRON has evolved over time from professional to friendly! She owns with Louis the mare VASSILIA D’ORGERES, from LOVE YOU. The flagship product of their respective production is VILLAGE MYSTIC, one of the best stallions of the young generation. Note that the mother of the stallion VILLAGE MYSTIC is from Anny’s breeding : NETCHKA D’ORGERES. They are associated on about ten products, broodmares and horses of confounded training, resulting from their respective breeding.

She also particularly appreciates the collaboration with Elise TOUVAIS at the Haras des Rouges Terres. She also likes the way she works with Louis, there’s a good connection! She hopes that this bond of trust and friendship, supported by a touch of luck will last for a long time to come!

In a nutshell, for Anny it’s only about happiness!

Qualification of GEZIREHA D’ORGERES with 1″19’7 in Caen on the 27th of June. (ATLAS DE JOUDES) 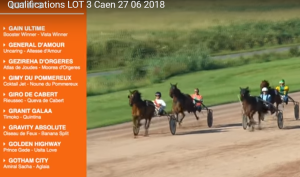 Two products of VASSILIA D’ORGERES will be sold on thursday, Jully 12th in the Haras des Rouges Terres :